(October 19, 2020) – According to new data from the Minneapolis Area REALTORS® and the Saint Paul Area Association of REALTORS®, buyer and seller activity in the 16-county Twin Cities metro both increased from 2019.

This summer and even early fall market continue to resemble more of a spring market. Although some activity from the 2nd quarter was shifted into the 3rd quarter, buyers more than made up for the lost time and continued to ink new records. Sales activity year-to-date is already above last year. Seller activity—while still lagging—made its largest gain since March. 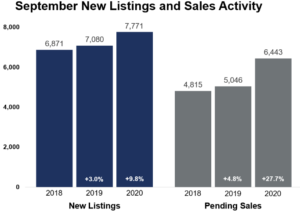 “The demand out there in the market at this time of year is truly remarkable—especially during a pandemic,” according to Linda Rogers, President of Minneapolis Area REALTORS®. “Even though seller activity is on the rise, inventory levels remain extremely low, particularly in the affordable ranges. Serious buyers should be prepared to write strong offers quickly.”

Multiple offer situations remain common as a large pool of buyers compete over a thinning stock of properties. Sellers, on average, accepted offers of 100.5 percent of their original list price—marking a new high for any month going back to at least 2003. A balanced market typically has 5-6 months of supply. At 1.7 months, sellers are still in the driver’s seat in most areas. 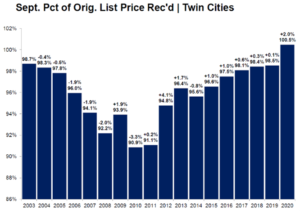 With such an imbalance in market forces, properties sold 31.8 percent faster than last year. Half the sales occurred in less than 15 days, tying with August for a 14-year record pace. “Even though activity is strong overall,” said Patrick Ruble, President of the Saint Paul Area Association of REALTORS®. “Every city, neighborhood, price range and property type are unique.”

For example, sales rose 41.4 percent in Minneapolis and 33.8 percent in St. Paul while new listings were up 47.8 and 17.7 percent, respectively. Seller activity in Minneapolis reached its highest level since 2007, while seller activity in the metro overall reached its highest level since 2008. The region’s condo market, however, saw new listings rise 28.9 percent while sales fell 2.6 percent. The metro condo market has 4.0 months of supply while that figure is 6.0 months in Minneapolis. Perhaps driven by attractive jumbo rates, sales of homes priced over $1M are up over 60.0 percent from last September.

September 2020 by the numbers compared to a year ago